The days of scanning newspaper want ads are pretty much over. And spending time on Internet job boards? Well, that’s OK as long as you don’t rely solely — or even mostly — on job boards to land new work. Lou Adler, author of The Essential Guide for Hiring & Getting Hired (Workbench Media, 2013), says that job seekers should spend 60 percent of their job search time on networking.

According to Adler, U.S. employment forecasts are improving slightly, but only reflect jobs that are posted. He says there’s a hidden job market filled by internal promotions and referrals or recommendations. Only job seekers who make and nurture plenty of connections have the best opportunities to land 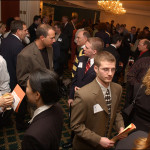 Of course, the only way people in your network will refer you is if they’re aware of your achievements and initiative. That means being a self-starter who thinks positively, seizes opportunities and sees them through, and shows self-motivation on the job.